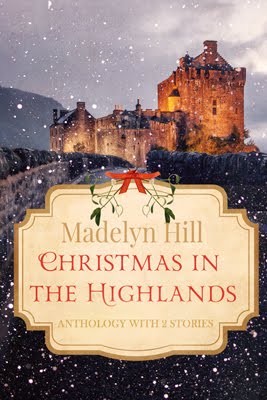 Christmas in the Highlands Anthology by Madelyn Hill

A FAMILY FOR CHRISTMAS
CHRISTMAS IN THE HIGHLANDS, BOOK ONE
Laird Malcolm Sutherland needs a bride. He has few requirements of his new wife; demands he should have insisted with his former betrothed—namely, honesty, loyalty, and resources.
Lady Rossalyn Gordon will do anything to be rid of her tyrant father, even if that means deceiving the man who offers her an escape. If revealed, those secrets will either bring her mercy, or thrust her back into the hands of the devil who sired her.
When Rossalyn’s bastard of a father arrives at Sutherland Keep, going back on his word and ordering her return, Malcolm must decide if he can forgive his wife enough to listen to his heart and have a family for Christmas.
HIS BY CHRISTMAS
CHRISTMAS IN THE HIGHLANDS, BOOK TWO
Fiona Sutherland longs for love with the man she has pined after since she was a lass. When he weds another she is devastated, and questions why the man she pledged her heart to has forsaken a vow made in their youth. Could loving her be so hard?
Cameron Munro adores Fiona from afar, knowing her heart has been set on another. She is everything he desires—strong, loyal, and fiery in spirit.
Determined, he pledges to prove his love to her and win Fiona’s heart by Christmas.

I had not previously read anything by this author but I love Highlander romances because the men are always these strong, tough, over the top Alpha males.  These two books were of no exception.

This anthology contains two books: A Family for Christmas & His by Christmas.  In the first book we meet Malcolm Sutherland and his new wife Rossalyn.  They get married to solidify a pact between two clans, and have an instant connection but deceit and past hurts cause a wedge in their brewing relationship.  Also running around is Fiona Sutherland, Malcolm’s clan member who has her sights set on wedding the laird herself.  In the second book, Fiona is heartbroken because Malcolm has fallen in love with his new wife and she feels left behind.  Cameron has had his heart set on Fiona since they were children and he will do whatever he can to convince her that he is the right man for her.

These books were written so well that I dove right in and didn’t come up for air until I was pretty much done with the book. There were so many elements that made these great reads; the characters were relatable, the drama and suspense helped balance each other out, the supporting cast of characters helped being personalities and other view points to the story and the romance was steamy.  Overall it was everything you’d want in a book.   My only real complaint about the book is that there wasn’t more of it to keep me going.  The story was fairly fast paced so you could easily read through half the book without realizing time had passed so quickly.

Madelyn Hill has always loved the written word. From the time she could read and all through her school years, she’d sneak books into her textbooks during school. And she devoured books daily. At the age of 10 she proclaimed she wanted to be a writer. After being a “closet” writer for several years, she sent her manuscripts out there and is now published with Soul Mate Publishing. And she couldn’t be happier!
A resident of Western New York, she moved from one Rochester to another Rochester to be with the love of her life. They are busy with their 3 children and a puppy named Cannoli! They love to cook, go to the movies, and hang out with friends.
Contact Links
Website
Facebook
Twitter
Blog
Pinterest
Goodreads
Purchase Links
Amazon
a Rafflecopter giveaway