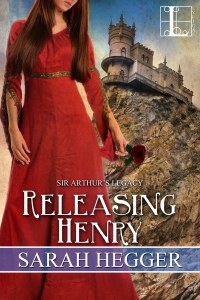 A light in the darkness . . .
The youngest son of Anglesea, the once idealistic Henry has survived the Holy Pilgrimage, but lost all his deeply held beliefs in honor and nobility. Captured in battle, he is sold as a slave into the home of Alif Al-Rasheed, a wealthy Genovese merchant who has converted to Islam. Bereft of faith, imprisoned in a foreign land, Henry has lost hope in his ability to love again—until he lays eyes on his captor’s beguiling daughter.
A marriage of opposites . . .
To Henry, Alya is a beacon of beauty he cannot ignore. But the heart of this proud daughter of Cairo will not be won so easily. Divided by religion, language, and culture, Ayla has little in common with the disillusioned Englishman—and yet he has vowed to protect her life in exchange for his freedom. As they embark on a perilous journey to safety, their bond will grow—and be tested—in ways neither can anticipate. For their greatest challenges will arise where Henry least expects. With threats conspiring to divide them, will he find the strength to stand by Ayla—and together will they find a common ground on which to build a future?

Born British and raised in South Africa, Sarah Hegger suffers from an incurable case of wanderlust. Her match? A Canadian engineer, whose marriage proposal she accepted six short weeks after they first met. Together they’ve made homes in seven different cities across three different continents (and back again once or twice). If only it made her multilingual, but the best she can manage is idiosyncratic English, fluent Afrikaans, conversant Russian, pigeon Portuguese, even worse Zulu and enough French to get herself into trouble. Mimicking her globetrotting adventures, Sarah’s career path began as a gainfully employed actress, drifted into public relations, settled a moment in advertising, and eventually took root in the fertile soil of her first love, writing. She also moonlights as a wife and mother. She currently lives in Colorado with her teenage daughters, two Golden Retrievers and aforementioned husband. Part footloose buccaneer, part quixotic observer of life, Sarah’s restless heart is most content when reading or writing books.
Website * Facebook * Twitter * Google+ * Pinterest * Instagram * Amazon * Goodreads

Giveaway: copy of the book
a Rafflecopter giveaway

Follow the tour HERE for exclusive excerpts and a giveaway!
http://silver-dagger-scriptorium.weebly.com/sdsxx-tours/releasing-henry-book-tour-and-giveaway